Interstate 95 is the nation’s busiest highway, and at Washington, DC’s Woodrow Wilson Bridge, it goes from eight lanes down to six.

The bridge, opened in 1961 and designed to carry 75,000 vehicles a day, is now crowded with 200,000 cars and trucks. Each day, it labors with seven hours of heavy congestion and backs up for miles in both directions, tying up four major interchanges. Its accident rate is twice the national average.

But relief is on the way.

The new bridge will parallel the old (which will be torn down), connecting Virginia and Maryland and passing through the District of Columbia at its southernmost point near the middle of the Potomac River. After more than 10 years of political wrangling, controversy and lawsuits, work began in 2000. When it is finished in 2011, not only the bridge itself, but also both approaches and the four interchanges will be rebuilt. The completed roadway is expected to handle 300,000 vehicles a day by 2020.

“This project is completely unique,” says Senior Safety Engineer Chris Claggett, who has worked the last year and a half on this project. The bridge’s graceful, arching design – which won a Presidential Design Award for Outstanding Quality – is spectacular, but presents a host of one-of-a-kind construction problems.

Kraemer and American Bridge have the contract to build the bascule – the supports and the drawbridge that can be opened to allow tall ship traffic to move between the capital and the Chesapeake Bay. Each pair of the bascule’s four, 3.5 million-pound steel draw spans will be supported by three cast-in-place, concrete V-piers. The contract for the bascule is $186 million. 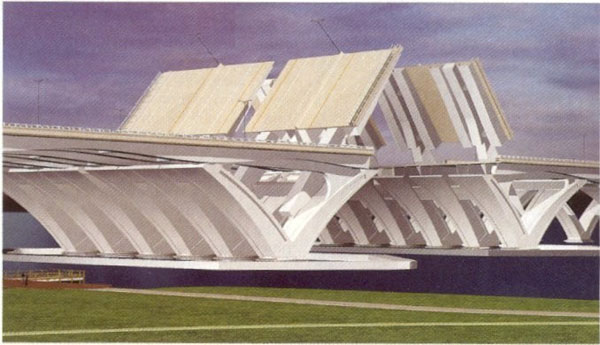 “Out on the river, we had to build false work so we could set the forms and pour concrete for the piers,” Claggett explains. The forms alone weigh up to 58,000 pounds. Forty thousand cubic yards of concrete and eight million pounds of rebar go into the supports. “All those materials have to be moved from shore to our work deck. Access is a big challenge.”

“It’s like nothing else,” says Ron Freeland, Laborer steward on the project. “In terms of health and safety, it’s a whole lot of everything. It’s a small, crowded space out there, plus we’re climbing at a 45-degree angle to work at the top of the forms. Slips, trips and falls are a constant concern. A lot of stuff moving overhead, something could drop. Crane safety and signaling are important. Water safety is an issue, too. And concrete burns – we’re handling a lot of cement.”

“We handle safety in the same meetings where we discuss production,” says Claggett. “In fact, we don’t draw a distinction. It’s one thing. Safe production.”

Indeed, “Safe Production” is the name given to Kraemer’s national safety program. “Our corporate culture is built around an overall philosophy,” says Nick Vranak, Kraemer’s Loss Prevention and Control Manager. “We embrace total quality management. Safety, quality and productivity are handled as one interconnected entity. It is operationally managed by ensuring competent person skills among superintendents and foremen, going beyond the OSHA minimums and training the larger workforce as well. We are actively caring, not reactive, and we spend time focused on the positives.” 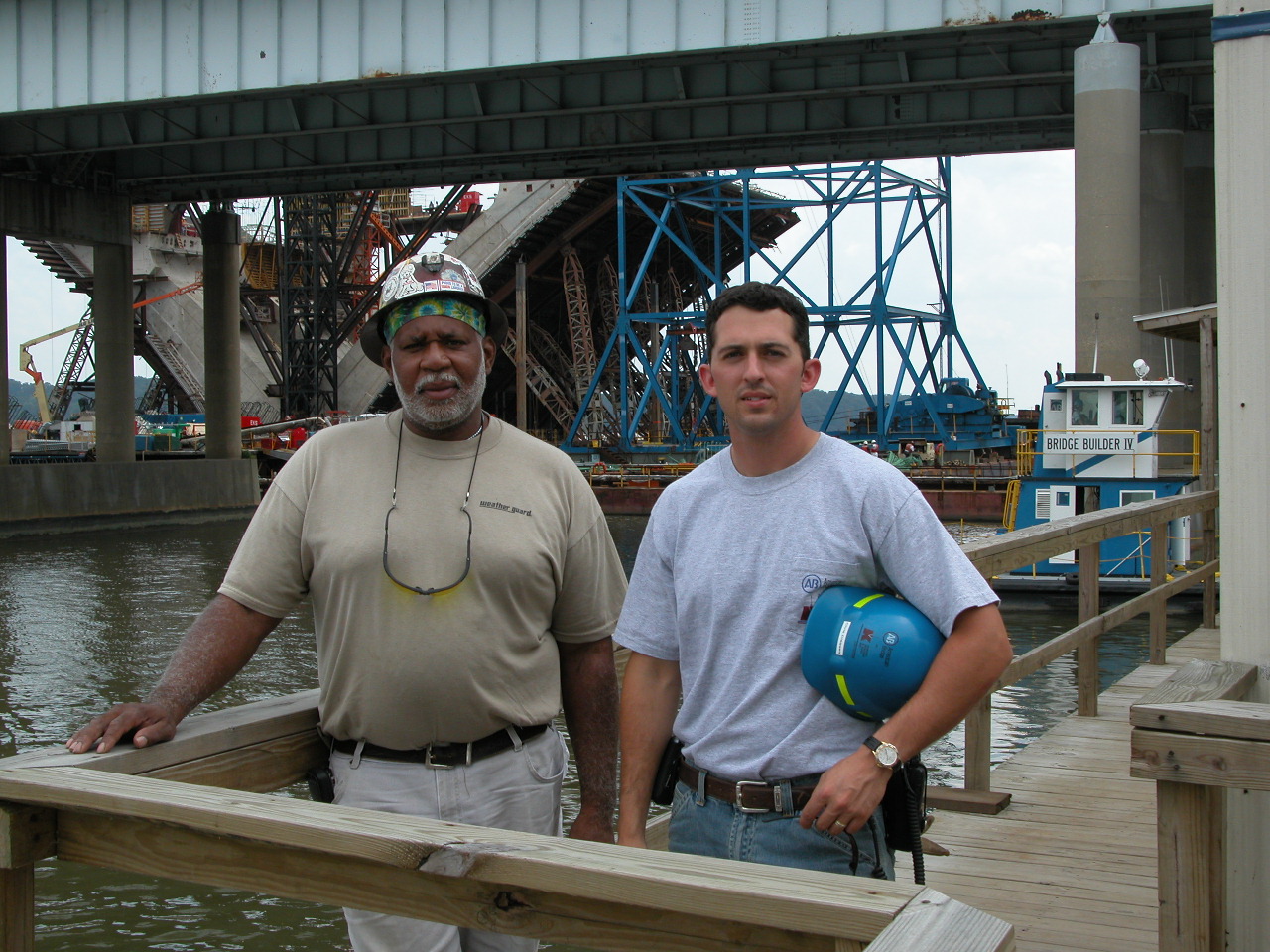 At the bridge project, Safe Production is managed in a variety of ways. Claggett, who reports to the Kraemer regional office in Hanover (MD), is responsible for all aspects of safety on the project. “The foremen actually run the show,” he says. A safety committee – consisting of himself, the foremen, the stewards and the supervisors – meets once a month. Every morning at 6:30, project supervision meets to coordinate resources for the day’s activities while addressing safety and other concerns. At 7:00, the foremen bring the information to the crews while also reviewing the day’s SWAT (Safety with Assigned Tasks) assessment. This is a discussion of the work, the hazards and the control of hazards. Crew members are encouraged to contribute. Generally, crews are multi-trade; 150 tradesmen, including 30 to 40 Laborers, work on the job. Claggett and his committee do safety walk-throughs at least once a week. New hires to the project go through a three-hour orientation and training program.

So far, according to Vranak, safety on this project has been “on the leading edge, but there’s room for improvement.”

Claggett elaborates. “We’re always improving. That’s the good thing.” He notes that a year ago, just a few months into the work, the monthly incident rate was above Kraemer standards. In the year since, however, the project placed additional focus on safety and cut the rate by two-thirds. It is now beating the industry average. “We had one lost time case a little more than a year ago, but we’ve gone 180,000 hours, now, without a lost work day.”

In addition to their joint venture on the bascule contract, Kraemer and American Bridge hold the $191 million contract for the Maryland approaches with a third partner, Trumbull Corporation. So far, they have lost no work days on that project.

The bascule and Maryland approaches are both union contracts, negotiated under a national agreement between the construction trades – represented by the National Heavy and Highway Alliance (NHHA) – and the Infrastructure Contractors Association. LIUNA General President Terence M. O’Sullivan is chairman of the NHHA. The Virginia approaches went to a non-union contractor.

“This project was kind of the Super Bowl of union versus non-union construction contracting,” says Ray Poupore, Executive Director of NHHA. “Clinton was President when specifications were developed. Generally, he supported project labor agreements (PLAs), and we wanted one. Maryland, responsible for about 70 percent of the project, agreed to a PLA, but Clinton left office without signing off on it. Bush came in and banned PLAs, handing responsibility to the Federal Highway Administration (FHWA). Competitive bids were sought. The foundation work went non-union, and the low bid on the bridge was way over the engineers’ target. So the FHWA broke the bridge into three projects – the bascule, the Maryland approaches and the Virginia approaches – and bid each one separately. The competition drove the price down, but union contractors still won two out of the three.”

“This region is still mainly a non-union area,” says LIUNA Vice President and Mid-Atlantic Regional Manager Dennis L. Martire “so these bridge contracts are important to us.” Kraemer recently opened a regional office in Hanover and is aggressively bidding work in the region. “When they win, we win,” says Martire. “We’re glad to have them in our region.”

“Kraemer is the number one contractor using the Heavy Highway agreement,” says LIUNA’s Director of Construction, Terry Bumpers. “They’ve never done a non-union job and don’t have a non-union arm.”

“We would have had to bring an entire human resources department to the area to staff the bridge project but for the fact that we could rely on the unions to provide a qualified workforce,” says David Kraemer, the company’s President/CEO and the grandson of its founder. “Union workers are well trained, highly skilled and safety conscious.” He says his father always worked union, and he has never had a reason to do otherwise.

So far, the bridge project is on schedule and within budget. “Kraemer proves,” says O’Sullivan, “that contractors who put emphasis on skills and safety – that is, contractors that work union – can compete successfully for important projects and bring those projects in safely, profitably and on time.”

Through its Construction Division, Kraemer is building all over the country, including a bridge between the United States and Canada. In addition to the Woodrow Wilson Bridge, two high profile projects are the Galena Creek Bridge near Reno (NV) and the Hoover Dam Bypass southeast of Las Vegas. Kraemer also has a successful Materials Division that produces high quality aggregate products.

More information about Edward Kraemer & Sons is available at the company’s website.