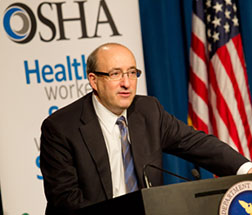 If you missed the first part of Scott Schneider’s interview with Dr. David Michaels, who served as OSHA’s Assistant Secretary of Labor from December 2009 until January 2017, you can read it here. The second half of their interview touches on OSHA’s permissible exposure limits, joint occupational and environmental exposures and one major change Dr. Michaels would like to see at the agency.

Scott: Everyone pretty much agrees that OSHA’s permissible exposure limits are outdated, but efforts to change them haven’t made much progress. What is it going to take to create significant change on that front?

David: Before last year’s presidential election, my hope was that the reform of the Toxic Substances Control Act would be a model for rethinking PELs as well. With TSCA, a compromise between the chemical industry and environmental community led to a legislative commitment to evaluate a specific number of chemicals. I would prefer to see categories like control banding instead of looking at specific chemicals, but regardless, it’s likely going to take activity outside of OSHA in the form of legislative change. And if that happens, it will be because industry and labor came together and agreed that it’s time to do something about OSHA’s outdated PELs.

Scott: At the LHSFNA we did a lot of work with ANSI to put out consensus standards for the construction industry, which have to be updated every five years. Could OSHA use those standards as a model to update its existing PELs?

David: There are so many areas where we don’t have standards, I think it’s good to have consensus standards out there, even though the agency can’t enforce them. At the same time, we can’t continue on the chemical by chemical approach, even though there are organizations that still push for that. Control banding says if a chemical has certain characteristics, it should be treated a certain way, and all the chemicals in that band should be treated similarly. That is what the pharmaceutical industry does for a lot of their chemicals and I think that approach makes sense.

Scott: Let’s shift gears to talk about some of the recent changes around recordkeeping. I always told employers the real value of recordkeeping was for them – to figure out what’s going on in their workplace and to correct those problems. With Congress overturning the Volks rule, it seems even more important to convince employers to adopt this mindset. What are your thoughts on the state of injury reporting?

David: Because of the Volks decision and the recent Congressional action, OSHA’s current recordkeeping rules are almost unenforceable and there is going to be even more downward pressure now on accurate reporting. If employers know they don’t have to tell the truth and they have to supply injury logs when applying for insurance or bidding certain contracts, there will be pressure to cover up problems.

Scott: To address this problem of underreporting, there’s been discussion about moving away from injury and illness reporting (lagging indicators) and toward more positive leading indicators (trainings, close calls, employee involvement, safety culture, etc.) to assess worker safety. Do you see that as a potential solution for the current underreporting problem?

David: At one time the relationship between environmental health and occupational safety and health was certainly much closer. To the detriment of the worker safety and health, they’ve moved in different directions. Most people don’t think of the work environment as part of the environment. In some ways, the reform of the Toxic Substances Control Act is a good first step to doing that again, since the EPA has to consider workers in their analysis of what counts as a safe exposure. As long as the EPA is doing that sort of work, workers shouldn’t be exempt from those protections. Another option is trying to link occupational health to sustainability reporting. Sustainability reports often focus on carbon footprint, water use and other environmental issues, but worker issues could figure more prominently in that.

Scott: Thank you for taking the time to sit down with me today. One last question: if you could make one change in how OSHA operates, what would it be?

David: The standard setting has to change. We have to move to a different set of expectations for employers. Some of those expectations would still be hazard-specific, but more would be related to the broad systems they have in place to protect workers. Employers have to take more responsibility and OSHA should be able to set the requirements in a broad way and evaluate the results more quickly with better data. The world has changed since the agency was created and OSHA should be able to use those new tools.