Shake Salt and Sodium Out of Your Diet

This is the second in a series of articles discussing high blood pressure and what you can do to reduce your risk.

Health fairs are opportunities to have blood pressure and other medical concerns checked for free and without having to take time off to go elsewhere for screenings. To schedule your health fair, call 202-628-5465.

“High blood pressure will be the cause of death for one out of every six people who die this year, many who are in the prime of their lives,” says LIUNA General Secretary Treasurer and LHSFNA Labor Co-Chairman Armand E. Sabitoni. “Genetics may be a factor, but most people can lower their risk by reducing the amount of processed foods they eat.”

Processed foods, including lunch meats, canned soups, pre-prepared meals and fast food, are full of salt. Salt consists primarily of sodium and too much sodium can make blood pressure climb.

The LHSFNA’s Health Promotion Division offers a workshop on nutrition and fitness for Laborers. For more information, call 202-628-5465. Brochures offering tips on nutrition, diet and general wellness can be ordered through the online Publications Catalogue.

The role of sodium

Food manufacturers add sodium to their products because of its flavor enhancement and preservative abilities. Refrigerated foods that contain sodium don’t spoil as quickly and shelf life is longer for canned and packaged items.

Current dietary guidelines recommend limiting sodium to less than 2,300 mg a day for people up to the age of 51. That’s about the amount found in a teaspoon of salt. After age 51 – sooner for African Americans – the recommendation is no more than 1,500 mg of sodium. That’s what is in half a teaspoon of salt. Most Americans consume more than double the amount of their daily recommended sodium level.

Sodium is essential to the body in small amounts. Sodium helps maintain fluid balance, helps transmit nerve impulses and influences the contraction and relaxation of muscles. This includes the heart. 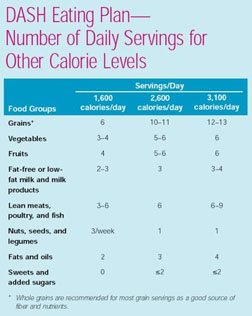 Too much sodium disrupts all of these functions by causing the body to retain fluids. Beginning with high blood pressure, the fallout is disastrous. Often going undetected for years, high blood pressure can lead to heart disease, stroke, kidney disease and congestive heart failure.

You can reduce your risk for high blood pressure and sometimes even control it without medication (your doctor will make that decision) by following a low sodium diet such as the DASH Diet (Dietary Approaches to Stop Hypertension). The Dash Diet emphasizes fruits, vegetables, low-fat dairy products and moderate amounts of fish, poultry, whole grains and nuts.

Following the DASH Diet can also reduce the risk of cancer, diabetes and osteoporosis. It can also help control or reduce weight.

So shake that salt and sodium out of your diet and get your blood pressure down to where it belongs. That’s below 120/80. Inside and out, you’ll feel and look a lot better.

Next month, a look at how stress affects blood pressure.

If you’ve ever hit your finger with a hammer when you intended to pound ...

How Food Affects Your Mood

Have you ever experienced the energy highs and lows that come with eatin...

Eating Well While on the Road

Whether it’s a family vacation or traveling for work, at some point we a...

Should You Be Drinking All That Coffee and…

There’s no doubt that Americans love their coffee and tea. About 64 perc...

Help in Finding a Healthy Diet

Failing at New Year’s Resolutions is almost as much of a tradition as ma...

Jumpstart Your Day: Drink a Glass of Water

Do you ever feel like you’re not up to par? Maybe you’ve got a bit of he...

Is Your Sandwich Harming Your Health?

Did you eat a sandwich today? If so, you probably consumed way more sodi...