It has been years in the making, but OSHA is now closer to issuing its final rulemaking on crystalline silica. After several extension periods, OSHA stopped collecting public comments on the proposed rule and will next hold hearings this month.

The LHSFNA will speak at OSHA’s March hearings, but in the meantime submitted public comments that endorse and expand on those given by the Building and Construction Trades Department. The major aspects of the LHSFNA’s comments are summarized below. 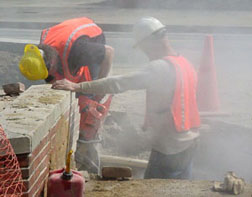 A known occupational hazard for hundreds of years, silica dust has been proven to cause lung cancer, silicosis and other deadly lung and kidney diseases. The LHSFNA has previously summarized the proposed rule and detailed how OSHA’s permissible exposure limits (PELs) are not stringent enough to protect the health of Laborers.

Because Laborers operate dust-creating equipment (e.g., jackhammers, chipping guns and drywall sanders) and work near silica hazards created by other trades, this rule is of vital importance to protecting their health.

The Use of Workplace Controls

OSHA mandates the use of controls for health standards such as lead and asbestos regardless of exposure level. Practices known to result in high exposures, like dry sweeping or using compressed air, are prohibited. Controls that are effective, such as the wetting of asbestos, are required regardless of exposure level. The LHSFNA believes a similar approach should be taken with silica, and supports requiring controls for all dust-generating tools and providing protection to everyone in the defined work area.

Dozens of studies show silica exposures can be effectively controlled using water or local exhaust ventilation systems. Most construction operations can be controlled to below the proposed 50 µg/m3 permissible exposure limit (PEL) at relatively low cost. Even if exposures cannot be controlled below 50 µg/m3 for a specific task, average exposures over an eight hour day will likely fall below that level because many construction operations do not last all day. For the highest exposure tasks, controls can be combined with the use of a respirator to reduce exposures below the PEL.