With H1N1 now a full-blown pandemic infecting people around the globe, drug manufacturers are scrambling to have a vaccine ready for the October through May flu season. The World Health Organization’s decision to raise the alert to the pandemic level reflects the spread of the virus, not the severity of the illness it causes.

The symptoms of H1N1 include fever, cough, sore throat, runny or stuffy nose, body aches, headache, chills and fatigue. A significant number of people who have been infected also report diarrhea and vomiting. On occasion, complications lead to severe illness and death. For additional information, go to the CDC website.

The CDC recommends these and other everyday steps to protect your health for fall 2009:

Tamiflu is an antiviral drug that has been shown to lessen the symptoms of flu when taken within 48 hours of becoming ill. The drug works by slowing the spread of the flu virus through the body and has been shown to reduce the risk of developing pneumonia. However, side effects may include vomiting and nightmares in children. There are also concerns that overuse of the drug could lead to a more virulent form of H1N1. That is why the World Health Organization (WHO) suggests that anti-virals like Tamiflu not be prescribed to flu sufferers unless they are severely ill or are members of high-risk groups, including pregnant women and young children.

“Although ‘pandemic’ means widespread, it does not necessarily mean lethal,” says LIUNA General Secretary Treasurer and LHSFNA Labor Co-Chairman Armand E. Sabitoni, urging calm preparation. “We must be ready, but we should not panic.”

Although, for the most part, people who become infected do not become terribly sick, there are concerns that the virus could mutate into a more lethal form. As of now, the majority of the fatalities have been among people with pre-existing medical conditions, such as chronic heart and lung disease, a suppressed immune system, diabetes or obesity. Like seasonal flu, which kills 36,000 people every year, H1N1 must be taken seriously.

H1N1’s method of spreading mirrors other flu and respiratory illnesses: exposure to coughing and sneezing from people who are already sick and from touching something where the virus is already lurking – a telephone, a computer keyboard, a subway turnstile – and then rubbing your eyes or touching your mouth or nose.  You will have flu symptoms – aches, fever, fatigue – but only a lab test can determine if your flu is H1N1. However, because no medication can cure H1N1 (or any other flu,) your only choice is to rest, drink plenty of water, take medication to control your fever and ride it out (for those in high-risk groups, see sidebar on Tamiflu). If you endure vomiting and are in danger of dehydration, you should see a doctor or go to an emergency room right away.

Meanwhile, scientists are still trying to determine who should be first in line for vaccination. In a typical flu season, adults in the 64-plus age bracket are most at risk for becoming ill. Although people of all ages are vulnerable and need to take precautions, a distinguishing characteristic of H1N1 is that younger people are most in the crosshairs. The Centers for Disease Control (CDC) recommends the following order for receiving the vaccine:

With H1N1, people ages 64 and older are least likely to contract the virus. However, they are still susceptible to seasonal flu and should continue to take the seasonal vaccine.

“With or without a vaccine, Laborers and their families should take measures to ward off the virus,” Sabitoni says. “These include washing your hands frequently with soap and water and covering your mouth when you sneeze or cough. You should also stay away from people who are sick, and stay away from others if you become ill. Once your fever stops and you quit taking medication for it, you should stay home for 24 more hours so you won’t infect others.”

Another recommendation championed by government health officials is to sneeze or cough into your elbow or shoulder.

Also, be aware that later this month, more information will be forthcoming from the Centers for Disease Control as vaccine preparations are finalized. LIFELINES ONLINE will publicize that information. 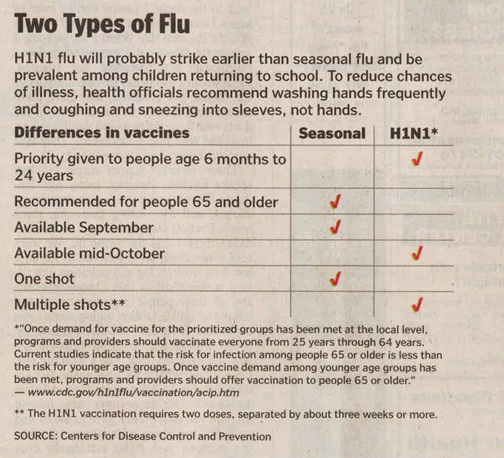