The Difference Between Dust Masks, N95s and Other Respirators

Last year was the most destructive wildfire season in California’s history. Hundreds of thousands of acres burned, causing billions in property damage and tragic losses of life across the state. Even in areas not directly affected by the fires, millions of people were exposed to wildfire smoke, and air quality became an important topic of discussion among workers, who spend much of their time outdoors, and the public.

“Choosing the proper respirator can prevent overexposure to the harmful contaminants found in wildfire smoke,” says LIUNA General Secretary-Treasurer and LHSFNA Labor Co-Chairman Armand E. Sabitoni. “Being educated on what respirators and paper dust masks do and do not protect against can help LIUNA members and their families protect their safety and health during times of reduced air quality.”

All smoke is a mixture of carbon dioxide, water vapor, carbon monoxide, particulate matter, hydrocarbons and other organic chemicals. Particulate matter in wildfire smoke includes microscopic bits of organic chemicals, metals, soil or dust particles and allergens such as pollen or mold spores that are suspended in the air. These microscopic particles can get deep into the lungs. While a facial covering like a wet bandana might keep someone from inhaling grit or other visible dust, it won’t stop fine particulates from getting into the lungs because of their size – they are much smaller than the width of even a single human hair.

Inhaling these particles can cause a range of health effects, from irritation of the lungs and throat to more serious conditions such as bronchitis, worsening of existing asthma and heart failure. Exposure to high concentrations of particulates can cause persistent cough, phlegm, wheezing and difficulty breathing. Children, pregnant women and the elderly are especially vulnerable to smoke exposure, as are people with cardiovascular disease. 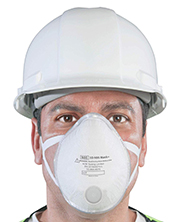 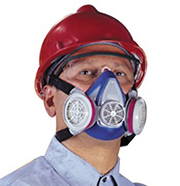 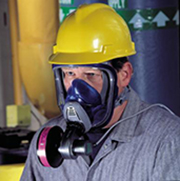 During times of poor air quality, many people choose to cover their mouth and nose to protect themselves from breathing in wildfire smoke. However, not all masks and facial coverings actually protect the lungs from the harmful respirable particles found in wildfire smoke. Here’s a breakdown of the intended use and level of protection offered by each:

When worn correctly, these respirators are effective at filtering out the small respirable particles found in wildfire smoke. However, they do not filter out fumes and gases; for that, see the next type of respirator listed.

Steps for Using an N95 or P100 Respirator Correctly

For a respirator to provide protection, it must form a tight seal around the mouth and nose. Facial hair doesn’t allow a tight fit, so wearers should be clean-shaven. Respirators can increase risk for other medical conditions because it is more difficult to breathe through them. If you feel dizzy, lightheaded or nauseous, first tell someone, then go to a less smoky area, remove your respirator and seek medical attention.

This article covers general respirator use. Workers performing wildfire cleanup or wearing respirators for other purposes should follow their employers’ policies under OSHA’s respiratory protection standard or other applicable standards.