The Health Benefits of Giving Blood

Blood donations save thousands of lives every year, yet the American Red Cross almost always has a need for more blood to be donated. That’s partially due to the fact that less than 38 percent of the population is eligible to donate in the first place, but also because events like natural disasters increase the need for blood and because circumstances like severe winter weather have forced the cancellation of blood drives.

There’s no doubt that donating blood can save lives, but did you know there are also health benefits for donors? Read on to find out more about the potential advantages of giving blood.

Iron helps transport oxygen around the body, and about two-thirds of our body’s iron is in our red blood cells. While some people have too little iron (known as iron deficiency), having too much iron in our blood can also be a problem. Over time, excess iron gets deposited in the liver, heart and pancreas, where it can cause cirrhosis, liver cancer, cardiac arrhythmia and diabetes. Removing red blood cells during blood donations is one of the only ways to reduce the amount of iron in the body.

Why Is the Need so High? 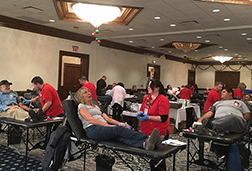 This benefit is likely linked to reducing iron in the blood. Studies show reduced risk for cancers of the liver, colon, lung, esophagus and stomach among regular blood donors.

While more difficult to measure than the benefits above, the emotional benefits of giving blood shouldn’t be ignored. Helping others can reduce stress levels, improve your emotional well-being and create a sense of belonging among you and your fellow donors. Because most people choose to donate at blood drives close to their home or at work, building that bond with co-workers or people in your community can have real benefits for your emotional health.

Before giving blood, donors undergo a brief health screening that measures their pulse, blood pressure, temperature and hemoglobin levels. While this screening isn’t a replacement for visiting your doctor for an annual checkup, it could help uncover an underlying medical condition the donor isn’t aware of yet, such as high blood pressure. After you give blood, your donation is also tested for 13 different infectious diseases, including HIV and West Nile virus. The Red Cross shares any findings with the donor.

So the next time your LIUNA District Council, Local Union, signatory employer or local community organization hosts a blood drive, consider donating. Keep in mind, however, that some people aren’t able to give blood. Click here to find out more about the standard screening and donation process for giving blood. If you have questions or concerns about whether it’s safe for you to donate, contact your local American Red Cross chapter, hospital or healthcare facility.

What You Need to Know About COVID-19 Vaccines…

The CDC has approved the Pfizer COVID-19 vaccine for most children and a...