The Longer You Work, the Less You Hear 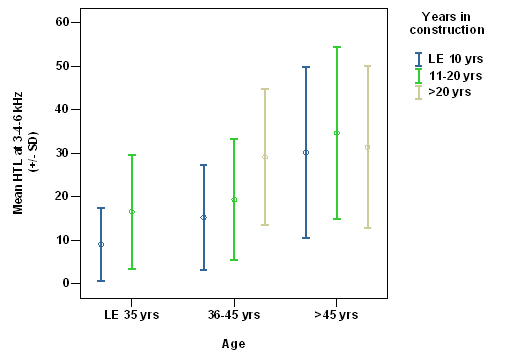 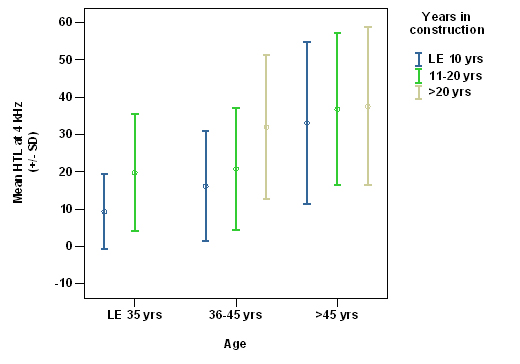 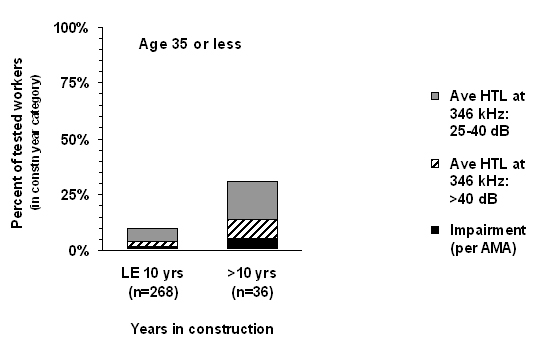 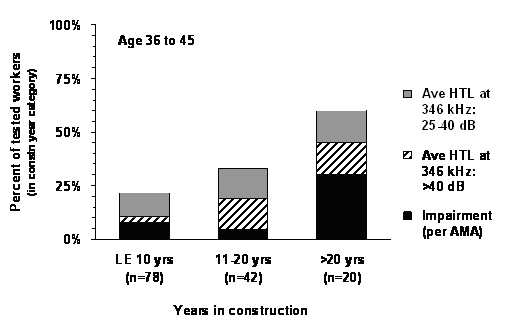 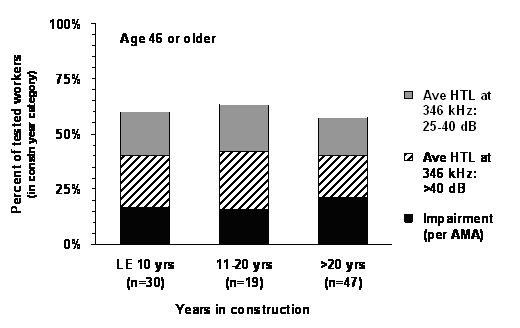 “This study affirms the need to establish hearing conservation programs throughout the industry,” says LHSFNA Labor Co-Chairman and LIUNA General Secretary-Treasurer Armand E. Sabitoni.  “It’s another reason why OSHA should renew and accelerate consideration of a noise standard for construction.”

Bill Daniell, Associate Professor of Environmental and Occupational Health Science at the University of Washington, analyzed the data which was gathered by Build It Smart, a construction industry safety and health organization. The data was from tests of 540 LIUNA members who reported no known hearing problems from their youth. For the purposes of the analysis, workers were divided into three groups by age (<36, 36-45 and >45). Tests were done at the Kingston WA Training Center.

Chart 1 shows how much hearing members have lost by age and how long they have worked in construction. The older workers had more hearing loss and those who worked more years in construction also had more hearing loss (except for those over 45, which may be a result of older workers with a lot of hearing loss not participating or having left the trade.) Chart 2 has similar data, but only shows the results from 4 Kilohertz, which is where noise-related loss occurs first and is the frequency most important for speech.

Daniell concluded that after taking into account hearing loss due to aging “at least for workers 45 years and younger, hearing ability gets worse with more years in construction.”

The new data add evidence to the efforts of the LHSFNA and the Construction Noise Control Partnership to encourage adoption of engineering and administrative controls – as well as personal protective equipment – to restrict noise exposure among construction workers. More information on the partnership is available on the LHSFNA noise page.

More Affordable Hearing Aids Are on the Way

About 30 million Americans experience some level of hearing loss, but on...

Listen Up During World Hearing Day

March 3rd has been designated by the World Health Organization (WHO) as ...

Hearing loss is a major problem for Laborers, many of whom endure slow b...

Not long ago, everything known about the effects of construction work on...

Did you know that a comprehensive program that protects workers’ hearing...

“What Did You Say?” More People Than You…

How’s your hearing? The reality is it’s probably not as good as you thin...

When you think of landscaping, dangerous working conditions probably are...