“It takes a different kind of person to be a tunneler,” says Boston’s LIUNA Local 88 Business Manager Ken MacLean. Perhaps he is a good example.

“Twenty-eight years ago, I was back from Viet Nam, still unsettled,” MacLean recalls. “One afternoon, I met a tunneler, and we got to talking about his work. When my explosives experience came up, he suggested I could sign on as a tunneler. Next day, I went over to check it out. No sooner was I down the shaft than they said, ‘Stop here, we’re about to blast any second.’ Next thing, the blast of air was whizzing by, the adrenaline was rushing and I was hooked.” 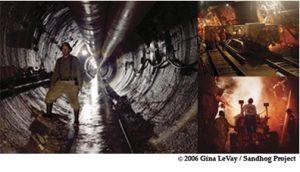 Richard Fitzsimmons, Business Manager at LIUNA Local 147 in New York City, is another example. His father was a Sandhog, his brother’s a Sandhog and his two sons are following in the path. “We don’t accept Laborers with no experience,” Fitzsimmons says. “Tunnelers are a unique breed.”

Tunnelers may be unique, but they are in high demand. Across the United States and Canada, the tunnel business is booming and the demand for skilled tunnel Laborers has never been greater. Striving to serve this growing market, LIUNA is partnering with the University of Arizona to reopen the SX Mine training center that has been closed for nine months because of insurance problems. The center will reopen in January and will train 10-14 Laborers in each of two, two-week sessions every month.

According to Fitzsimmons, aside from the SX Mine program, most tunnel training is done on-the-job. “For insurance and liability reasons, not to mention the practical costs of maintaining a mine and mining equipment, no employer is willing to shoulder the burden of training in a real mine,” he explains. “It’s up to us to train our own. That’s why I recruit Laborers who already know something about construction before we take them down a shaft.”

A big part of tunnel training is safety training. Mines are dangerous places. MacLean ticked off a list of typical hazards. “First of all, it’s a confined space, so breathable air is an issue. You’ve got to keep 19 to 22 percent oxygen. We use jet engine-sized blowers to bring in fresh air.”,/p>

He goes on. “Egress and access are issues. We use the ‘brass board’ to keep track of who goes in and to check to see that everyone comes out. With hot work and welding, fire is one of the most serious dangers. Moving trains and switching tracks present danger. Machinery accidents. Electrical hazards – we’re often working in standing water. Plus, we may be working a long distance underground from the entrance. We have to know first aid and CPR because it can take a while to get an injured person back to the surface. Rescue procedures are also critical.”

Much of the safety training is taught in mine safety classes at Laborers-AGC or local union training centers, such as the one run by Fitzsimmon’s brother Chris in New York. Yet, as work expands in the city, Fitzsimmons plans to send as many new recruits to Arizona as possible so they can encounter real tunnel safety issues while they are also learning tunneling skills. Of his most recent 130 recruits, 55 had training in Arizona and five of them are now working as foremen.

Improvements in training and technology have reduced tunnel fatalities in recent years. “When they were planning the Big Dig (the recently completed series of highway tunnels under Boston),” says MacLean, “they estimated that 132 workers would be killed or never work again from injuries in the process. We started work in 1990, and we’ve only lost four workers. That’s four too many.”

MacLean attributes much of the safety success to stricter OSHA enforcement and more educated contractors. “When I started, you never saw OSHA at a tunnel site and a lot of contractors cut corners. But the Big Dig was a huge federally-funded project so OSHA targeted it with frequent inspections and serious fines.”

In New York, where 36 years of boring on the Manhattan Tunnel #3 project was completed last summer, 23 workers were killed, but none in the last ten years. “Because millions and millions of man-hours were involved,” says Fitzsimmons, “that’s not as bad as it sounds.” Eight workers were killed in falls, five in struck-bys, five in crushes, two in collapses, two by explosives and one by electrocution.

Fitzsimmons attributes the improvement in the last decade to a more experienced, more safety-conscious workforce and better technology. “As the scale of the project diminished in recent years, the nucleus of the local shrank and we ended up with a more qualified, more experienced core. Also, the issue of drugs and alcohol was addressed. It wasn’t that long ago that the companies provided a bottle of Dewar’s and a case of beer to every gang at the end of every shift. That’s over. The new technology has its own set of dangers, but it reduces the need to blast and it absorbs much of the hammering that we used to do with handheld equipment.”

Fitzsimmons also speaks of the dangers associated with compressed air in tunnels. This is particularly problematic in soft ground that contains a lot of water. Local 147 – known as the Sandhogs for its early 19th century work when it built close to the harbors in the soft soil of Lower Manhattan – first encountered this problem in the 1870s when its members poured the footings for the Brooklyn Bridge. Compressed air was pumped into caissons (chambers) in the soft soil beneath the river in order to keep the water out while the footing was prepared. Workers rising from the caissons after work succumbed to a mysterious malady.

Long after the bridge was completed, builders learned that the disease, now known as Caisson’s Disease, can be prevented by bringing workers to the surface slowly so that nitrogen in their body tissues will not escape fast enough to cause “the bends” (cramps) and bodily injury. However, three Brooklyn Bridge workers died and about 15 percent of all others suffered paralysis due to decompression problems (in total, 27 workers died in the construction of the bridge). Even today, when pressures are generally eight pounds per square inch as compared to the thirty pounds common in the old days, many tunnel workers, including Fitzsimmons, suffer some effects from Caisson’s Disease.

“Tunnel workers have as tough a job as anyone in this union,” says LIUNA General Secretary-Treasurer Armand E. Sabitoni. “They must be highly motivated and extremely safety conscious. Though underground and often unseen, their impressive projects play a vital role in transportation and commerce all across North America.”

Sabitoni notes that many new tunnel projects are in the pipeline. A major water outfall project is in progress in Providence and tunnel work continues in Boston and Washington, D.C. Four new projects have begun or are soon-to-begin in New York, including the filtration plant sited in the Bronx at the urging of the New York State LECET. A contract will soon be signed for 300 railroad tunnels in Virginia and West Virginia. Out west, tunnel projects are in motion in Seattle, Portland, Las Vegas, San Francisco, Los Angeles, San Bernardino and San Diego. The Devil’s Side project is a major tunnel on Route 101 along the coast in Northern California, and construction will soon begin on 16 tunnels in the Sacramento area. Tunnel work is also expanding in Canada where one of North America’s largest-ever tunnel projects – under the city of Niagra Falls – began just over a year ago. It will be completed in 2009.

“Every project is different and has different workforce requirements,” says LECET’s Pacific-Southwest Region Construction Market Representative Ron Myers. “Larger tunnels use the Tunnel Boring Machine (TBM) or the Pressure Balance Machine (PBM). Many use the traditional drill and shoot method. Some are hard ground. Others require compressed air. It’s our job to supply qualified tunnel Laborers to the union contractors who win these contracts, and we’re running out of people.”

Tunneling is “hard, tough work” and “you’d be surprised how many men – and women – can’t take being confined underground like that,” says Myers. However, for those willing and able, the pay is very good.

Though Fitzsimmons is in New York where the high cost of living tends to drive up wages and other compensation, he is proud to say, “Local 147 has one of the best contracts in LIUNA. We invest our lives in this work and we make sure our people benefit.”

Yet, “95 percent of the time, after I talk to an applicant, I can tell if he’s going to make it in the tunnels before he ever goes down,” says Fitzsimmons. While he needs workers, he is cautious in his approach. Right now, his local has 830 members; as the work ramps up, he expects it to grow by about 50 percent. However, Fitzsimmons wants to keep a mid-sized local where he can know everyone by name and face. “I’m looking for Laborers from the tri-state area who have six or seven years’ experience in drilling and concrete, who know the moves and the equipment.” The west coast locals are also looking.

Like MacLean in his time, the men and women returning from war in Iraq and Afghanistan may find the rush of tunnel work exciting and may have the fortitude to endure its hardness and danger. And, as with Fitzsimmons’ family, new generations of tunnelers will continue to sign on to the family trade. Yet, the opportunity is widening now, and LIUNA is stepping up its efforts to recruit and train a new wave of safety-conscious, world-class tunnelers.