Washing Hands – Properly – Is Your Ticket to Good Health

“Washing your hands is still the easiest and most effective way to keep from getting sick during flu and cold season,” says LIUNA General Secretary Treasurer and LHSFNA Labor Co-Chairman Armand E. Sabitoni. “Unfortunately, most people fail to do it correctly.”

That is the finding of a Michigan State University study of nearly 4,000 people that was recently published in the Journal of Environmental Health. Researchers observing public restrooms in restaurants, bars and other facilities around the city of East Lansing found that just five percent of people actually wash their hands for 20 seconds. According to the Centers for Disease Control and Prevention (CDC), 20 seconds are required for soap and water to kill germs. 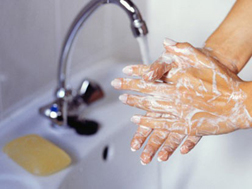 So how much time do most people spend on washing their hands?

Six seconds. And that’s not the worst of it. Researchers also found that one out of every 10 people leaves the restroom without washing their hands at all.

Men are more lackadaisical than women. The study found that 15 percent do not bother with any sort of hand hygiene compared to seven percent of women. And when men do make the attempt, half use no soap and merely rinse their hands under a running faucet. Most women who wash their hands use soap – 78 percent – but since most are not washing properly (see above), it is not particularly effective.

Flu and cold viruses and the many types of bacteria that cause foodborne illnesses, E. coli and salmonellosis among them, can survive for hours – sometimes days – on all types of surfaces, including  ATM machines, keyboards, phones and salt shakers. When people touch these and other objects throughout the day, germs accumulate on their hands. They then infect themselves when they touch their eyes, nose or mouth. Most people unconsciously engage in these behaviors more than three times an hour.

In restrooms, germs lurk on toilet seats, towel dispensers, sinks and door knobs. People who do not wash their hands properly often leave restrooms carrying many of the germs they came in with plus a few more that were left by earlier visitors. These bugs are responsible for millions of sick days and billions of dollars lost in the workplace.

Always wash your hands before:

Always wash your hands after:

In addition, wash your hands whenever they look dirty.

How to wash your hands:

Use regular soap. Antibacterial soap is no more effective at killing germs. Furthermore, washing with it could contribute to more germs becoming resistant to soap’s cleaning agents and, therefore, harder to eradicate.

“Don’t get sick because of poor hand hygiene,” says Sabitoni. “Frequent and proper washing of your hands will help keep you healthy during flu season and throughout the year.”