In the United States and Canada, each workplace death is handled as a separate incident, unconnected to all the others that occur needlessly every year. 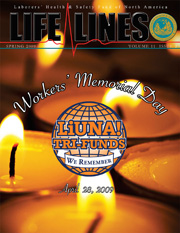 Each is a tragedy, especially for the victim’s family and survivors. Each individual is unique. Each provided joy and sustenance to others through his or her own personality, caring, competence and dedication. Each deserves to be honored and remembered. At LIUNA and the LHSFNA, we remember.

At the same time, it is important to step back and see the larger picture as well. Worldwide, a worker dies every 15 seconds due to on-the-job injuries or illness. That’s about 6,000 per day or two million a year.

In the United States, almost 5,500 workers were killed on the job in 2007 (latest Bureau of Labor Statistics data), more Americans than have been killed in the Iraq and Afghanistan wars since their inception. The annual rate of fatal injury is about four workers per 100,000.

In contrast, Canada’s rate of fatal injury is about three per 100,000 workers. However, the Canadian government tracks fatal illness as well, so the overall, on-the-job fatality rate rises to 6.8 per 100,000, the fifth highest rate in the world (following Korea, Mexico, Portugal and Turkey). It is impossible to determine the aggregate rate of worker fatalities in the United States because the government does not track deaths from occupational illness – those due to workplace exposure to toxics such as asbestos or silica.

hatever the exact figures, on-the-job fatalities in the United States and Canada are a serious social problem, yet receive too little societal attention. In the media, each incident is treated in isolation, masking the larger phenomena, limiting social awareness and constraining action by our political and regulatory systems.

Workers’ Memorial Day is LIUNA’s way of remembering our individual, fallen Laborers while also trying to advance social change that will protect workers’ lives in the years to come.  We want the public and our nations’ leaders to deplore and curtail these unnecessary deaths. We encourage our signatory employers to heighten their vigilance and their investments in on-the-job safety culture.

Workers’ Memorial Day is a time for all of us to remember Laborers who gave their lives building America and Canada and providing for their families. It is a time to rededicate ourselves to making sure that Laborers do not die on the job, nor contract illnesses that have a tragic effect on them and their families.