Smokers in the U.S. will soon direct store clerks to favored cigarette brands by pointing toward pictures of dead bodies, rotting teeth and cancerous lungs. Part of a federally mandated advertising campaign to remind the public of the serious consequences that come with a tobacco habit, graphic examples of the potential effects of tobacco use will adorn cigarette packs beginning in 2012. The hope is that more smokers will quit, and would-be smokers will think twice about starting. 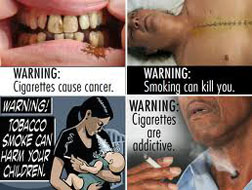 These images and others will appear on cigarette packs in the U.S.

The Food and Drug Administration (FDA), exercising recently acquired oversight of the tobacco industry, is considering thirty-six images of smoking’s fallout. The nine selected will be placed over the front and back of cigarette packages and across print ads. The message that smoking invites disaster will be difficult to ignore.

Smoking is the top cause of preventable death in the U.S. and Canada. According to the Centers for Disease Control and Prevention (CDC), more than 20 percent of U.S. adults, 46 million people, smoke cigarettes. Tobacco use causes nearly one in every five deaths. Every year, more than 443,000 people in the U.S. and 37,000 people in Canada die smoking-related deaths.

Smoking is prevalent in the construction industry. About 37 percent of construction Laborers smoke, and nearly four out of every ten have habits that exceed a pack a day. Smoking increases risk for cancers of the lung, larynx, esophagus, bladder, kidney, stomach and acute myeloid leukemia. When Laborers indulge, toxicological synergy heightens the threat due to exposure to hazardous construction site materials such as asbestos, silica and radon.

Congress granted the FDA regulatory powers over the tobacco industry in June 2009, when it approved the Family Smoking Prevention and Tobacco Control Act. Since then, the agency has outlawed flavored cigarettes and curtailed advertising practices that target teens. Coincidentally, this latest action from the FDA coincides with the release of new information that even minimal exposure to tobacco smoke increases risk of illness and/or death.

In Canada, however, where explicit graphics have been staples of cigarette advertising since 2000, the government recently canceled plans to increase the size of cigarette pack warnings after an extensive campaign by tobacco industry lobbyists. Both the Canadian Cancer Society and the Canadian Medical Association have spoken out against the government’s cancellation.

Breaking the tobacco habit is difficult, but the rewards for doing so are substantial:

The LHSFNA’s new Laborers’ Guide to Tobacco – containing classroom aids, tips for quitting, statistics, charts and fact sheets – can help Laborers put down cigarettes and other tobacco products for good. Instructor and participant versions are available. Along with brochures and posters that highlight tobacco’s dangers, the Guide can be ordered online at www.lhsfna.org.