“If it hadn’t been for BTMed, I’d be lying in the grave right now,” LIUNA Local Union 657 member Walter Christian says about his participation in the Building Trades National Medical Screening Program. He had had no symptoms other than fatigue, which the 67-year old retired Laborer thought was nothing more than a product of growing older. Then, he found out he had a tumor of the worst kind. It was malignant. And awfully aggressive. 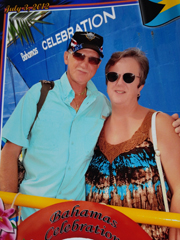 Christian had worked through the remediation years on the Department of Energy’s (DOE) Fernald site in Ohio. They were years spent taking down buildings, burying contamination, working in acid pits. And although safety standards had increased dramatically, he knew that the equipment they wore could never be perfectly reliable. That is why he enrolled in BTMed once he heard about the program offering free medical screenings to former DOE workers.

He went in for his first screening back in 2006, and again in 2010, since BTMed participants are eligible for a re-screening every three years. In 2013, Christian once again picked up the phone and scheduled an appointment. This exam, however, turned out to be far from routine.

“Blood was found in my stool when I went in for my physical this year, and I got an urgent call saying I had to go to my doctor immediately,” Christian explains. “If I’d waited, I wouldn’t be here talking to you today.” Upon visiting his doctor, he received a colonoscopy and endoscope, which revealed a Stage II bleeding tumor in the top part of his colon. Fortunately, it hadn’t moved beyond the intestine. He went directly for surgery to have the tumor fully removed.

Now, Christian is on the mend, saying he can “see light at the end of the tunnel.” No doubt a different light than the one he managed to avoid. “Thank God for BTMed. That’s all I have to say. Otherwise somebody else would be driving my car, riding in my boat,” he says.

That may be all Christian has to say for himself, but when it comes to encouraging other former DOE workers to receive their screening, it seems as if he has an important point to make.

“We worked our whole lives to enjoy our later years. What a shame it would be to waste that because you won’t pick up the phone to call BTMed to get your screening.”

Two days after speaking those words, Christian sent BTMed a picture of what he would never waste: the time he gets to spend with his wife.

The BTMed has been providing screenings to DOE construction workers since 1997 and currently serves 23 DOE sites. The screening Christian received is an easy process that consists of two steps: a work history interview and a medical exam.

In step one, a specially trained building trades worker or worksite expert conducts a work history interview to determine what exposures to hazardous material the former worker may have had and the types of illnesses that could result.

In step two, former workers receive a free medical screening examination to test for illnesses that may have developed from exposure risks, as well as other health problems. Following the exam, the participant receives a letter indicating any medical findings and which of them could be work related.

Many BTMed participants have discovered illnesses they would not have known were present and then gained access to government-funded benefits to treat their problems. The screening program has enabled many workers to file a claim with the U.S. Department of Labor under the Energy Employees Occupational Illness Compensation Program Act (EEOICPA). The EEOICPA offers workers medical coverage for the illness from the date the claim was filed as well as a compensation lump-sum payment.

LIUNA members working at many DOE sites are also eligible for compensation if they develop cancer.

The BTMed Program is coordinated by CPWR – The Center for Construction Research and Training and supported by the Building & Construction Trades Department of the AFL-CIO.

If you have worked at one of the covered DOE/AEC Sites, please contact the Building Trades National Medical Screening Program at 1-800-866-9663. The program’s website is www.btmed.org.

[This article was prepared by staff at the BTMed Program.]

Laborers and others who assisted in the rescue and recovery efforts at t...

What the Sun Is Actually Doing to Your…

Even if you understand the importance of protecting yourself from the su...

Do You Need Lung Cancer Screening?

If you are a Laborer who has quit smoking, congratulations. Giving up ci...

Hugh Jackman is a cautionary tale for what can happen when you don’t pro...

Most Americans Are Unaware of These Cancer Risks

Most Americans know that tobacco use and sun exposure increase cancer ri...

Did You or Someone You Know Help with…

One of the most tragic days in recent American history still haunts thos...